Located between the Brooklyn Bridge and the canyons of Wall Street, and known especially in our days for being a touristic shopping mall, having lots of cultural activities, restaurants and harbor cruises. South Street Seaport is more than that. In fact, this historic district, containing 3 piers and 11 blocks surrounded by Manhattan’s skyscrapers. In 1811/1812, the Schermerhorn Row was built, which became the city’s first center of world-wide trading.

The business in this area made New York the ‘’Empire State’’ at the time and made the USA the world’s rising power. We can see this building tod     ay thanks to the work of many preservationists who worked hard to keep it, starting in 1966 when the neighborhoods started to be destroyed by bulldozers. They created a museum in memory of this sea economy around ships, sailors and merchants of the port. The nation’s largest museum fleet of historic ships was situated in this seaport. However they had no public funding and so the museum had financial struggles, having to accept illicit deals which jeopardized. However this museum was in 1998 the 3rd history museum in New York City being named the America’s National Maritime Museum for a period of time. However with the 9/11 terrorist attack and the Hurricane Sandy, this museum suffered a lot. What’s more, New York City refused to pay for any reparations, because it had been secretly evicted. Howard Hughes accepted to rebuild part of it, however he asks for the eviction of some buildings to construct a 50-story hotel complex, which would completely change this historic district, changing it forever, and driving to completely forget this seaport important history.

Today, we can still find some old building of this era, but it has mainly become an advanced cultural district, with lots of interesting cultural activities, featuring an architecture center and even local food festivals. 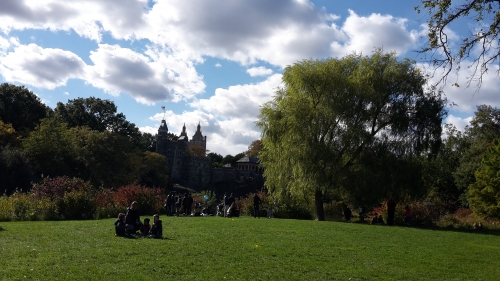 The park was created in 1857 further to the will of the population which wished a green space in the city. Indeed, at the beginning of 1800s, NY is already a city strongly populated with approximately 200 000 inhabitants in 1830. The state decides then to build the park on an uncultivated ground. Following to a competition for the future project, Frederic Law Olmsted and Calvert Vaux are retained.

Frederic is a landscape painter and American architect. Originally his project was that the park would be divided into 3 parts.

Calvert Vaux is also a landscape painter and  American architect. He saw the park as an enormous park capable of welcoming the largest number.

At time, the ground was covered with swamps, rocks and people lived in the park. They cleared rocks by means of explosives and they expelled the inhabitants and we destroyed houses. About 2000 people worked on the arrangement of the ground . 500 000 trees were cut and the works lasted about 19 years.

At the beginning, known Central Park a very strong influx. It was the leisure center of inhabitants. It's moreover in this context that the zoo of Central Park and the Metropolitan Museum of Art settled there.

However, with the appearance and the development of the automobile, the population began to turn away from the park and one began to trivialize.

But in 1934 a new mayor was elected : the republican Fiorello. He wanted to give a new life to the park : This is the way to give this mission to Robert Moses, a town planner.

In 1960s, they stopped again taking care the park when Robert left his post . The park was the scene of vandalism, garbage dumps and gangs. It's then that in 1970 that diverse  association asked for the rehabilitation of the park : there were then many privates donations.